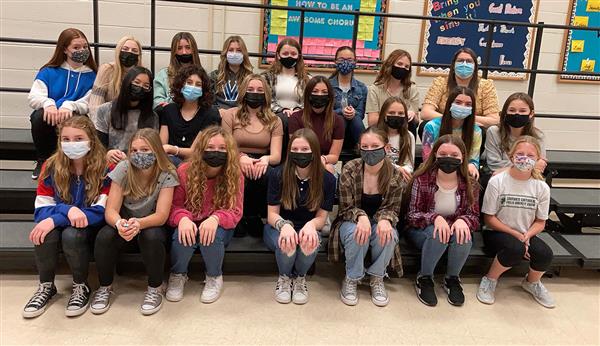 The Chestnut Ridge Middle School Vocalise poses after learning they had advanced to the finals of the B101.1 Christmas Choir Competition.

WASHINGTON TOWNSHIP – Members of the Chestnut Ridge Middle School “Vocalise” chorus got the news they were waiting for on Thursday morning, December 3, 2021. Live on the Jenn and Bill Morning Show, Philadelphia’s B101.1 FM announced that the group was the winner of B101’s annual Christmas Choir Competition for K to 8 ensembles.

With its victory, Vocalise, an all-female auditioned chorus, earns the $5,000 grand prize and will have a chance to perform its song, “This Christmas,” with the Philly Pops at its Christmas Spectacular performance on December 8th at the Kimmel Center. In addition to Vocalise’s victory, the Hurffville Elementary School Fourth-Grade Chorus also scored well, taking third place and a $1,000 prize for its song, “Mister Santa.”

The two Washington Township entries first had to have their songs selected by the station as one of nine semifinalists. Then, those nine were broken up into groups of three. Each day, starting this past Monday, one group’s songs were played on the Jenn and Bill Show, and online voting was open until 9 p.m. that night. CRMS Vocalise and the Hurffville Fourth-Grade Chorus each won their semifinal matchups, leading to the finals and another round of voting on Thursday, December 2nd. CRMS had enough votes to top Hurffville and Indian Valley Middle School for the grand prize.

“CRMS Vocalise is so excited about winning the B101 Christmas Choir Competition!” Vocalise director and CRMS music teacher Katie Kershaw said. “We have worked so hard, and we are so eager to be the best musicians we can be. It means the world to us to get to share our performance at the Kimmel Center on Dec. 8th and to have won such an amazing prize for our school’s chorus department. Thank you so much to family, friends, coworkers, administrators, neighbors, etc. for all the support, encouragement, and kind words. We could not have done this without you!”

Click here to view a video reaction of the Vocalise learning they were the winners.

Click here to listen to Vocalise’s rendition of “This Christmas.”