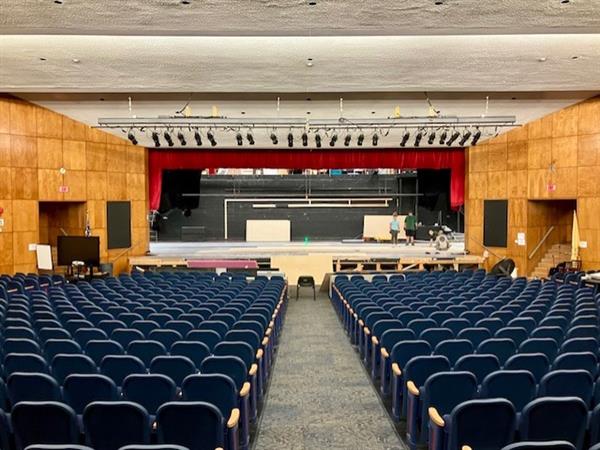 The transformation has been 60 years in the making. Four members of the International Alliance of Theatrical Stage Employees (IATSE) Philadelphia Local 8 are nearing the end of a four-week project of re-decking and painting of the stage in the 700-seat Play House (11/12 auditorium) at Washington Township High School.  The undertaking is another labor of love for the “house crew,” as all four are WTHS graduates who first saw this path to employment while students and now support every production in the performing space.  The four worked together in November 2021 to rebuild the stage in the Republic Bank Performing Arts Center and are now focusing their attention on the Play House’s original stage deck which dates to 1962. The facility has staged annual school musicals and dance recitals, as well choral and orchestral events.

“After seeing the results of the RPBAC staging and hearing the positive feedback from our staff and clients, I knew that these four could capably take on this transformation,” said Jim Weiner, manager of the school’s two theaters.

Interested in renting either of the two venues for a local event (i.e. comedy, speaking or musical event)? Please contact Jim Weiner at jweiner@wtps.org for availability and pricing.